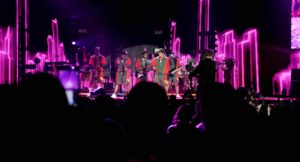 “The vx 4 provided the generous capacity and bandwidth required to deliver a stunning, theatrical piece to tens of thousands of attendees,” said Nick Rivero, CTO and co-founder, MEPTIK. “We surrounded the audience four outputs of 4K content, along with two HD outputs, to create a singular, cohesive visual experience of enormous scale.” 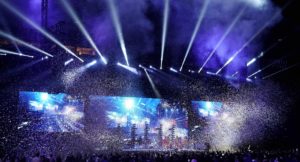 The MEPTIK team also used the vx 4’s 3D pre-visualization tools to frame and test the visual content in a virtual reality (VR) environment in advance of the event. Leveraging a CAD model of the stadium, MEPTIK brought event planners into its office to experience the content in a VR setting that put the client in the middle of Mercedes-Benz Stadium. “This allowed us to evaluate the experience together well in advance of the event and make adjustments to the size and scale and of the content that the vx 4 would ultimately drive to the displays,” he said.

Rivero adds that the vx 4 took on the responsibility of screen control, an application traditionally handled through a separate component. This both simplified the technical workflows and reduced MEPTIK’s production costs by as much as 40 percent.

“We typically use separate screen control for production of immense scale to monitor what happens onscreen,” said Rivero. “The broad flexibility of the vx 4 allowed us to eliminate that link of the chain, and centralize the majority of our production workflow with disguise.” 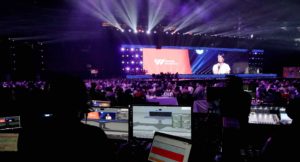 Ahead of the Curve

Rivero emphasizes that the disguise production toolkit elevates dynamic content visualization experiences for projects, and streamlines the integration of video, audio, lighting and other technologies. In addition, the 3D pre-visualization suite of tools included with vx 4 allows MEPTIK to demonstrate the entire show and content virtually to users so they know exactly what it will look like—a huge marketing and sales advantage. He adds that while vx 4 is built for video content, its power as a high bandwidth server allows MEPTIK to work with uncompressed video.

“Most systems simply work with pre-rendered video content; you create a video and load it. The disguise vx 4 offers power, performance and pre-visualization tools,” said Nick Rivero, CEO of MEPTIK. “We can execute up to four 4K outputs or 16 HD outputs in one box. We can maximize time and budget for our customers—with one system and one operator versus multiple systems and multiple operators. The vx 4 has further opened the creative universe that exists at MEPTIK.”